I’ll answer that question with a question: What did you learn in high school?

If you’re a couple years past graduation, like me *cough*, the answer is probably, “I don’t remember.” 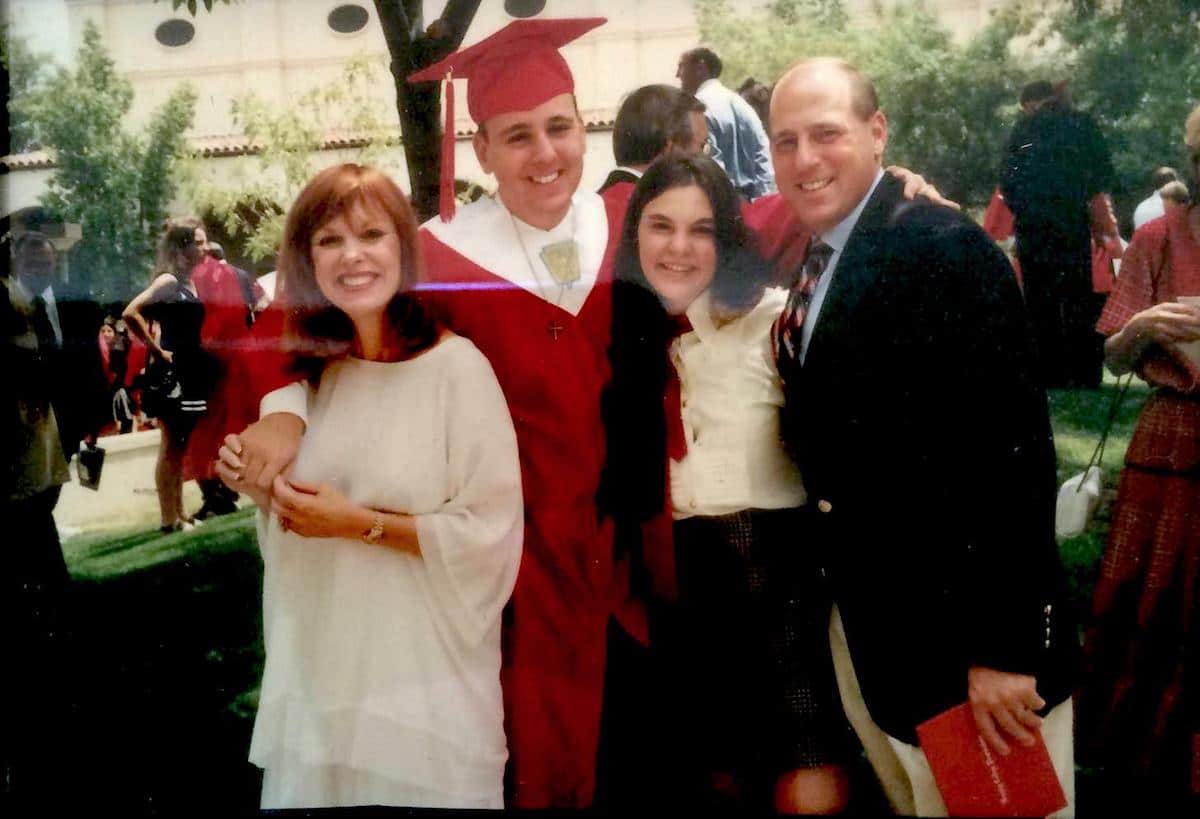 OK, maybe that’s not totally true for me. The quadratic equation surfaces in my mind occasionally. I also recall Christopher Marlowe’s “Doctor Faustus” and how, were it not for his untimely death, history might have regarded Marlowe as a rival to Shakespeare.

Oh, and did you know that as many as three individuals working independently wrote the biblical book attributed the prophet Isaiah?

And after re-enacting it several times, I’m pretty sure I can summarize how the United States Constitutional Convention went down.

Is that all I learned, though? Of course not. (I promise, dad.) Because high school isn’t just about what to think, it’s also about how to think. Or at least it was back in my day! *shakes cane*

Viewed this way, the quadratic equation isn’t just a function to memorize but training in math’s mechanistic logic. Dr. Faustus’ tragic tale teaches about the heavy spiritual cost of material power, especially if we take a shortcut to get there. Isaiah’s multiple authorship reveals how religious mysteries can couple with historical truths. And playing out the Constitutional Convention demonstrates real-world political compromise through the crucible of first-hand experience.

The process of acquiring, synthesizing, and mastering this knowledge taught me how to reason; how to engage with art beyond the surface and into its thematic depths; how to blend skepticism with wonder; and a bit about how the real world functions when working at its best, even if that “best” is still imperfect. These things I remember well.

Perhaps not everyone took away the same lessons from their high school, or even my high school, but that’s what I got.

Of course, I’ve learned plenty of interesting facts. For instance, I know that the area of New Zealand north of Auckland, the Northland, is one of the most beautiful and least-touristed parts of the country.

Ghengis Khan’s armies marched into Eastern Europe, including Poland and Hungary, before they were stopped. Not because any European army defeated them but because the Khan died back in Mongolia. Otherwise you and I might be Mongols today.

Once upon a time in the 1980’s and 90’s, Medellín, Colombia was the most dangerous city on Earth. Now it’s one of the most vibrant destinations in all of Latin America.

If you’ve ever wondered, no, Tasmanian Devils don’t move by spinning in a tornado-like fashion. But their jaws can chew through a car tire.

And I’m happy to say I also know that there are two train stations in Xi’an, China.

I could have learned these facts by reading online, which probably applies for much of what I learned in high school.

But is the acquisition of facts identical to learning? Is there no difference between the notes of a song and music, or dance steps and a dance? Is the whole ever greater than the sum?

In the same way, I’m sure my global adventure adds up to much more than a series of destinations and experiences. I’ve learned many lessons from the world, and I’ve asked myself what I can learn from all of them together.

Maybe not everyone travels like this, but I do. And when I do this, what do I see? Many things, two of which I’ve shared already.

“Life is so very difficult. How can we be anything but kind?”
– Buddha

I love that quote.

It doesn’t matter that Buddha never said it. The actual author was Jack Kornfield. (Close enough.)

But it resembles something Buddha would say, summing up in 12 words the tragedy of the human condition and one practicable, philosophical response to it.

As it turns out, Kornfield’s rhetorical plea also applies especially well to travel.

Being on the road alone, my life consists of a parade of strangers. In unfamiliar environments surrounded by unknown people, embodying kindness helps me to recall that, no matter how foreign the setting, I’m still on a small-ish globe of fellow human beings who (get this) enjoy being treated as such.

No matter how I’m feeling – whether afraid, hurried, exhausted, or confused – the world is still relational, and a frayed state of being doesn’t excuse blindness to others.

I only wish more travelers understood this.

The smiles I’m given throughout my average day as I treat locals with deference and respect not only feel nice, they remind us both that while our surface appearances may differ, we’re not so different underneath.

To employees and owners of hostels, shops, and restaurants, conducting myself in this way often makes me not just their customer, but a guest. Sometimes that’s only in their establishment; though in my favorite moments it extends to a much larger space.

For there is no feeling of warmth quite like being told by someone behind a counter or steering wheel, “Thank you for coming to my country.” Especially as a Westerner, and an American.

By treating people as I see them, as fellow human beings, they treat me the same. By de-objectifying them, they de-objectify me.

It’s simple, and a sure cure for loneliness.

Plus, I’ve learned that being kind creates magic. That’s the only word for it. Because kindness has come back to me in the form of other, more specific blessings, as well.

For example, when renting a camper van to drive through New Zealand, I was thrilled to find a bare-bones model online through Spaceships NZ (recommended), which I then happily paid for.

When I picked it up, I was shocked to receive a free upgrade to the company’s mid-class. During peak season.

Shortly before visiting Borobudur Temple in Indonesia, I chatted with a friend who had once traveled there. He urged me to indulge a bit and rent a small bungalow in his favorite boutique hotel, Villa Borobudur, overlooking the Magelang Valley.

I had been desperately sick in my dorm bed in Jakarta for a couple days, so I followed my friend’s advice, booked the hotel, and filed it under “self-care.”

When I arrived, I found I had been upgraded to the premium villa with a private pool.

In Xi’an, China, my tour guide for the Terra Cotta Warriors, who leads hundreds of identical tours every year, inexplicably gave me a model Terra Cotta horse at the conclusion of our group’s tour.

Dumbfounded, I sheepishly had to confirm with the hostel staff who recommended her that this wasn’t a usual thing.

And at the Niihama Taiko Festival in Niihama, Japan, after spending the day following the crew of a taiko float, they invited me to join them for their late-evening, after-festival dinner.

The festival is a competition. The teams must repeatedly lift and carry a 2-ton float throughout an entire day. Points are awarded for strength, coordination and teamwork. And the float isn’t towed via truck from their neighborhood to the main festival grounds and other competitive sites. The team rolls it on wheels. For miles.

Each group of dozens of men, mostly neighbors, plan and prepare for this annual event for an entire year.

Then I showed up with my backpack in the mid-afternoon, and shared in one team’s marvelous home-cooked ramen meal, prepared by loving mothers, wives, aunties, and girlfriends.

THE BEST EXPLANATION I’VE GOT

I have more stories like this that I’m quite honestly embarrassed to share. It has been an effort of courage sharing even some of these.

Why do they happen? Do I “deserve” them?

I don’t know. Nor am I the sort of person to suggest I ever deserve specific treatment from anyone.

I do, however, think it’s meaningful that the people I’ve mentioned and more seemed to enjoy extending kindness to me.

It’s a feeling I can relate to. As a traveler my kindness and courtesy is what I have to give. It feels good to give it simply for the giving, regardless of the outcome.

I imagine that it felt good to these strangers to give me their gifts from a genuine place, as well. In fact, I know it did.

So while I don’t know and will never ask why these kindnesses find their way to me (something about gift horses and mouths), I personally believe the answer might lie in the fundamental fabric of the Universe.

For as I discovered, in a lesser-traveled corner of New York City’s glorious Metropolitan Museum of Art, minds far greater than mine have peered into the weaving of things and discerned firsthand the timeless truth of mutuality, of treating others as we wish to be treated.

Golden Rule: Thou shalt not touch that which is mine, if thou canst help; or remove the least thing which belongs to me without my consent; and may I, being of sound mind, do to others as I would that they should do to me. – Plato’s Laws, B.C. 360


Might I be living the intertwining of these threads?

Where does kindness show up in your life? Do you have any stories of blessings finding their way to you? Have you ever had the feeling that what you put out into the world might come back in unexpected and creative ways? Leave a comment below.